Blue Heelers are one of my favourite dog breeds but after Cozzie we were scarred. We decided our next dog would be smaller, maybe not as smart but a dog that wanted to be part of a family. The answer was obvious: we would adopt a shelter dog. After weeks of searching we found Harry, or Dexter, as he was known when we met him, a scruffy looking Border cross Staffy Terrier. A new chapter was about to begin.

Harry was a sad looking pup, a timid submissive one year old with a scrawny almost rat-like tail. But there was something about him. He had adorable eyes, an expression that seemed to say “take me”, he loved to be patted and he was gentle yet playful with our kids. It was a good start.

But it wasn’t such a good start at home. The first thing he did was to run into our bedroom and wee on our bed.   I washed the covers and he did it again a couple of days later. Not the best way to impress new owners!

As the weeks and months passed Harry quickly adjusted to his new life with us. He was still submissive and would roll over whenever anyone came near him but he slowly came to realise that we weren’t so bad after all.

Time went on and the signs were there that he was settling in. He still has some neurotic tendencies though, even to this day. Anyone sneezing or chewing gum sends him into a quiver. Balloons terrify him, as do thunderstorms. His rat-like tail wags thunderously, like a helicopter blade when he gets nervous. But mostly he’s a very chilled out dog.

He goes everywhere with us. In fact Harry likes nothing better than a good camping trip by a river or into the mountains. He’s happy so long as he is with his clan. 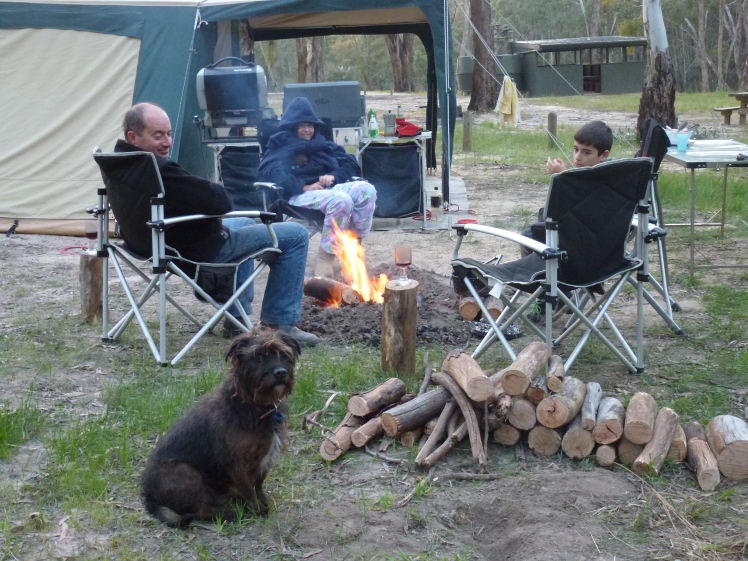 And we’ve been on plenty of adventures with him, some more memorable than others. Like the time at Phillip Island when he ran off onto the cliff tops chasing rabbits and I thought we had lost him for good. At home he has a tendency to jump our back fence and chase rabbits. I’ve given up worrying about him as be always comes back.

Harry has long since learned how to relax.  And he’s one of the most well-known dogs in our neighborhood. Largely because he takes himself for walks and ends up coming home with neighbors (some of whom I’ve only recently met through him). He loves everyone, will do anything for a pat and he has not a single mean bone in his body!

To anyone thinking of getting a dog I would say check out your local shelters and rescue centres. They’re a great way of meeting a potential friend for life. Harry is proof of that.

We’ve had our scruffy mutt for eight years now. He looks absolutely nothing like Bluey, our first Heeler dog, but there’s one thing they both have in common. They are both absolute gentle souls and everyone who meets Harry falls in love with him, just as they did with Blue. He is a kind, fun-loving dog, a smoochy companion who has completed our family unit once again.

20 thoughts on “And then along came Harry”