As we settle back into Victoria after our epic ten months travelling around Australia, I reflect on our time away and how grateful I am for it all Looking back it’s hard to know where to start so thank goodness for this blog which allowed me to journal our adventures. With so much wow factor … END_OF_DOCUMENT_TOKEN_TO_BE_REPLACED

After leaving the moody blues on the Eyre Peninsula coastline we head inland and begin our adventure in the Gawler Ranges. Our first stop is Wudinna, pronounced Wuddna, as said a truckie on the UHF radio coming into town. It has a nice vibe, there’s a huge statue of The Australian Farmer, a scenic 30km … END_OF_DOCUMENT_TOKEN_TO_BE_REPLACED

Cliff top camps, rugged ocean views and a roller coaster of emotions was all part of my stay on South Australia’s Eyre Peninsula. Here’s a lowdown on our time along this wild woolly coastline. After crossing the Nullarbor, Ceduna and falling in love with Our Patch at Perlubie Beach, for 16 amazing nights, it was … END_OF_DOCUMENT_TOKEN_TO_BE_REPLACED

After leaving Ceduna we continued along the South Australian coastline, with a rough plan to check out Perlubie Beach before heading to Streaky Bay. I’d seen drone photos of popular Perlubie with lots of vans and campers parked along its long sandy beach. We’d heard a-lot of stories about tides and cars getting bogged but … END_OF_DOCUMENT_TOKEN_TO_BE_REPLACED

The Nullarbor is one of the longest and straightest roads in Australia. Some say it’s also the most boring but I disagree. Whilst the Eyre Highway, aka the Nullarbor, can be done in a much shorter time (the record is 24 hours), I reckon this quintessential Aussie road trip deserves to be taken slowly. We … END_OF_DOCUMENT_TOKEN_TO_BE_REPLACED

Our journey continues as we leave The Duke at Orleans Bay and head back to Esperance. We meet up with our travelling friends Sue and Steve again and are invited to spend the night in the front yard of their friends property. It’s been a while since we’ve camped on lush green grass, with an … END_OF_DOCUMENT_TOKEN_TO_BE_REPLACED

From Hopetoun we head to the Duke of Orleans Bay, a coastal stretch of wilderness and one of WA’s most beautiful beaches. There we strike up a few connections, both new and old. … END_OF_DOCUMENT_TOKEN_TO_BE_REPLACED 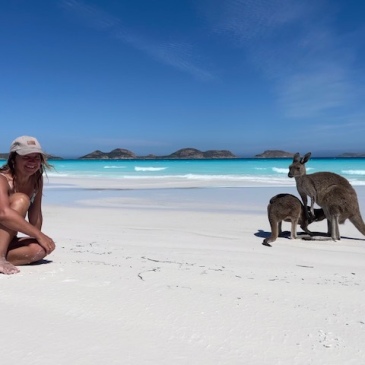 Once again it feels as though the Universe is guiding us. Soon after we leave Denmark, bushfires rage through and around the area. We’re unaffected. And the day after we visit Wyllie Bay in Cape Le Grand National Park there’s a shark attack not far from the beach we swam at, literally 24 hours earlier. … END_OF_DOCUMENT_TOKEN_TO_BE_REPLACED

Our two nights at Parry Beach campsite near Denmark are a real treat. With the beach only minutes away and tropical bushland surrounding our camp site, we have the best of both worlds. For the first time in ages it’s cool and we’re allowed camp fires, so it’s wonderful to sit and share laughs with … END_OF_DOCUMENT_TOKEN_TO_BE_REPLACED

From Bunbury we skirt around Perth. It’s still school holidays and everywhere on the southwest coast is busy, so we’ve booked a farm stay at Big River Station in the Margaret River region. It’s a peaceful spot and we spend three relaxing and very enjoyable days there. From there we travel further south to where … END_OF_DOCUMENT_TOKEN_TO_BE_REPLACED