Our international borders are closed and it’s anyone’s guess when they’ll reopen.

However, state restrictions are slowly easing and people are now able to explore beyond their own backyard.

Like many we dream and plan. We look forward to the day when we can rediscover and support the tourism industry and our local economy again.

Recently Tourism Australia launched Live from Australia, with a weekend devoted to travel experiences, broadcast and live streamed around Australia and the world.

Here were a few of the highlights.

“Think Chris Hemsworth inspired morning workouts in Byron Bay, croc encounters with the Outback wrangler Matt Wright and dance parties with The Wiggles. Take a break on Phillip Island … be captivated by an underwater world on the Great Barrier Reef, learn the best kept secrets of an Aussie bbq from chef Hayden Quinn and soak up the serenity of an Uluru sunset, all from the comfort of your couch …”

The campaign is all about bringing a little bit of the Aussie spirit and optimism into the lounge room and lives of people around the country, and the world, while we’re stuck at home. Whilst the ‘weekend virtual event’ has now passed the wonder lust remains.

Can I reignite some desire to travel? Maybe tempt you into a virtual love affair.

Who can resist a secluded beach, alluring in any season. As well as boasting the world’s largest coral reef, our massive coastline links 10,000 jewelled beaches. It’s easy to find your own space amid our sultry shores.
  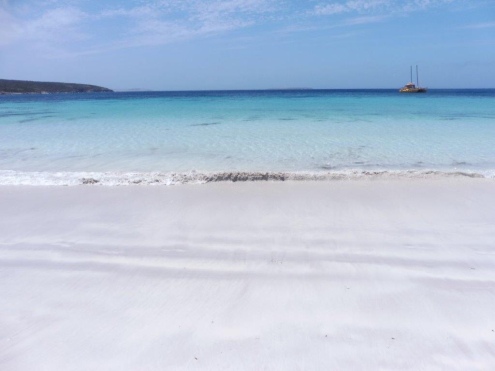 Memory Cove, remote and sublime in the Lincoln National Park 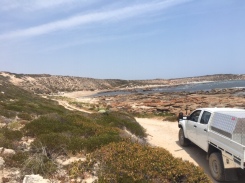 Off the track on the Yorke Peninsula 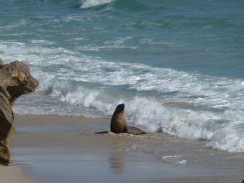 Locals at Seal Bay on Kangaroo Island
Fancy escaping off the grid, maybe exploring some remote beaches and tracks? While camping is still not allowed in some states, we can now enjoy day trips, treks and favourite places close to home.

Further afield, mountain ranges await, rugged peaks like the Grampians in Victoria that hold ancient stories, a timeline of earth mysteries and invigorating trails of discovery. 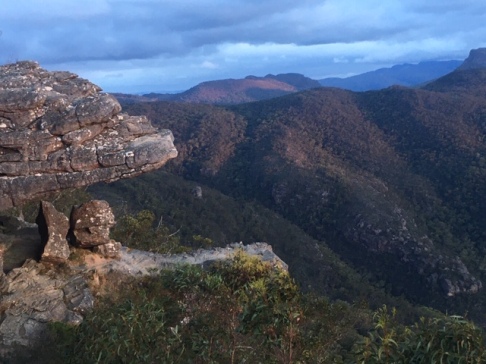 The magic of the Flinders
Every state has its gems. From the timeless wonder of the Flinders Ranges and ancient Arkaroola to the majestic coastline of the west and the tip of Cape York.

In between, the Red Centre holds its own secrets amongst the dramatic red and blue expanse of the outback.

Photographers will fall in love with the sublime light, like colours from an artists easel.

At Mungo National Park, along the Great Ocean Road and amidst national parks that are slowly re-opening, there are whispers of the past and hopes for the future.

In forests and bushland live unique wildlife. Now, more than ever, we need to protect and help preserve their habitats. 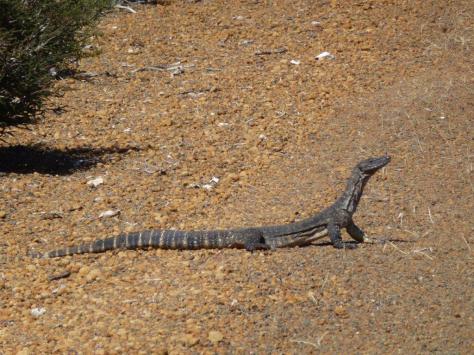 While humans have stayed away, there’s little doubt the wildlife have continued to play.

And iconic vistas are still here, standing as though a test to time.

Of course there’s more to Australia then epic landscapes and wide open spaces.

Big cities with vibrant personalities and bright lights are slowly coming to life again.  A buzzing coffee culture and a sumptuous food and wine scene is waiting to welcome adventurous foodies.

Yes, we’re a land of abundance. In fact, there’s a lot more here than meets the eye. 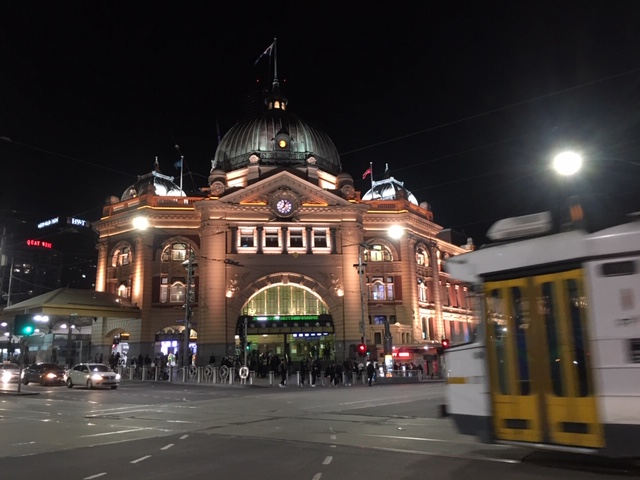 Here’s a few lesser known titbits about this vast land.

Melbourne’s tramway system is one of the largest in the world with over 500 trams rocketing over 250kms of track. It also has the highest number of cafes and restaurants per number of people than any other city in the world.

Uluru, also known as Ayers Rock, is one of the oldest rocks on Earth. This stunning sandstone formation with a width of 8kms at its largest point, evokes a magical aura as its colours change during the day.

Did you know that over 2.5km of Uluru is underground? Amazingly, around 2.5kms of the rock is connected to the Olgas, where the rock emerges again 16 miles away.

Our island state Tasmania has the cleanest air in the world. Take a deep breath and relax, it’s easy here as you explore the island’s many beautiful places, including Cradle Mountain and Freycinet National Park.

For wine lovers there are over 60 wine regions across Australia, with wine produced in every state. Cheers to a great red and a gourmet cheese platter.

Fancy a long drive? The Nullarbor Plain is home to the longest straight road in the world at 146kms along. Just point and drive.

In Queensland, Fraser Island is the largest sand island in the world. Drive (4WD only) along 75 Mile Beach, the sand highway that runs the length of the island. Venture inland to rainforests, rivers and pristine lakes.

Big, beautiful, bold Australia. There’s nowhere like it on earth.

The main highway on Fraser 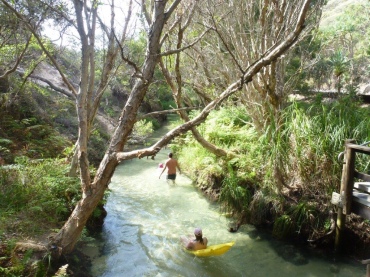 Eli Creek
Then there’s the people.

Laid back, loyal, cheeky, tough, funny, irreverent and resilient. Always barracking for the underdog and willing to lend a helping hand.

We’re diverse. One in four of Australia’s 22 million people were born overseas. To borrow the phrase from our unofficial national anthem “we are one but we are many, and from all the lands on earth we come.”

Yep that’s us. Multicultural and a friendly bunch, albeit a bit whacky. To give you an idea, there’s a strange obsession to drive around the country and photograph big things. Big bananas, giant mangoes, big pineapples and massive prawns, a giant koala and merino, a big bogan and the big golden guitar at Tamworth, just to name a few.

Is it any wonder one of our most loved movies follows a group of drag queens on a musical road trip across the Aussie outback.

It makes me want to hit the road with the music cranked right up.

Australia might still be closed for business but there’s a lot of love here. Keep us in your mind, we’re not going anywhere.

As quiet as it is right now, while we’ve been resting the world has never looked more beautiful. Let’s look after it as we move forward and into a new future.

Stay well and enjoy the journey, wherever in the world you are.

With love from Australia

Click on the image below for details on the livestream. 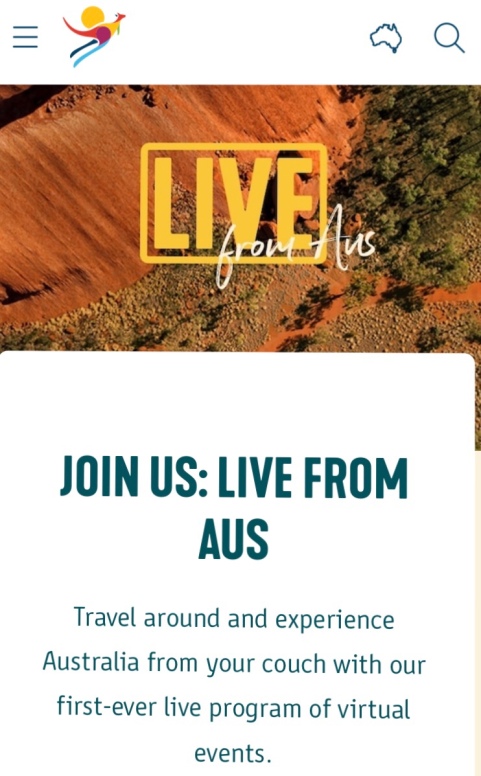 111 thoughts on “With Love from Australia”

Tuesday tweets! Love these friendly King Parrots and colourful moments that brighten up our days. Have an amazing Tuesday. ❤️❤️❤️
All aboooaard for a new week!! Here’s the Walhalla Goldfields 🚂 leaving the Thomson Station on the weekend for a leisurely scenic trip. May the tracks ahead of us this week be full of promise ...
Weekend in Walhalla. It’s been nearly two years since our last visit, but this tiny little village, tucked amongst the hills of Gippsland, never loses its charm. Enchanting, peaceful and perfect in any season, especially Autumn. 🌺🧡
Sitting on top of the world, with a birds eye view of Mount Abrupt from the Piccaninny. Grey and cloudy one minute, blue skies the next. Mother Nature likes to keep us on our toes! 😀
Happy hump day. Whatever the weather, clouds always lift and the sun shines again. That’s exactly what happened on the weekend, barely ten minutes after taking this photo. 🌥
Enjoying the simple pleasures of life while camping. A fire, a peaceful view, a good brew and a few delicious extras on the side. What lights you up? 🔥✨☕️