Fancy a weekend filled with excitement, history, rugged tracks and awesome scenery? And possibly some of the best Aussie tucker you’ll find this side of Melbourne.

We spent a weekend rollicking through Rawson a few months ago and I wrote a story which, I’m excited to say, was published in this month’s issue of 4×4 Australia, one of Australia’s most read four wheel drive magazines.

So, where the hell is Rawson, you might ask.

For the answer to that, and a glimpse at some highlights of “Parmas and Potholes” here’s five things to love about Rawson.

Rawson Caravan Park is 170kms east of Melbourne via the Princes Highway and north via C466.

It’s the perfect base for exploring. The park feels more like a bush reserve with four wheel drive tracks literally at its doorstep. From here you can take the short cut to Walhalla or head out towards Mt Baw Baw. At Reception we’re given a mudmap of the area and then we’re ready to explore.

But first the essentials. Every site is powered and has its own dunny. Yep, there’s no running through the scrub in the middle of the night here. It might not be a Hilton en-suite but having our own toilet and shower right outside the van is a bit of a luxury.

Rawson Stockyard is at the heart of the Caravan Park … its very own bar and bistro on site. And it’s an absolute ripper.

You almost expect to see whip cracking cowboys with their horses sauntering up outside. Inside this barn like bistro has a rustic charm that’s straight out of a Wild West movie. There’s timber beams and history hanging on the corrugated iron walls, happy go lucky locals and huge meals. And at the bar everyone’s your mate!

It’s lively, family friendly and the food is top notch. I had one of the most unusual chicken parmas ever … a chicken schnitzel topped with vegemite, cheese and avocado. Sound weird? Trust me, it works.

3. Adventure on the tracks

Did I say adventure? Yep, there’s plenty around here. Tracks that lead to Mt Baw Baw, Thomson Dam, Bruntons Bridge and Coopers Creek. We found ourselves on Lower Saddle Track, which was heaps of fun (though slightly hair-raising). It involved a river crossing, a steep incline and then a very steep descent, through ruts, grooves and pot holes.

Whilst hub was manoeuvring the track I was furiously taking photos on my phone. Mainly to keep my white knuckled nerves distracted!

Walhalla is not far from Rawson and is one of my favourite places in Victoria. Nestled in a picturesque valley, this gold rush town feels suspended in time. On the weekend we were there a piper was playing bagpipes on an outcrop, which added a magical element to an already enchanting town.

Walking through Walhalla feels like stepping back in time. There’s tours through the Long Tunnel Extended Mine, heritage buildings like the fire station and the Chronicle to explore, an old fashioned lolly shop, ghost tours at night, the Tramline Walking track high above the town and cafes where you can stop and take it all in.

Hop on board the restored railway and take a scenic train ride through mountain scenery.

Did I mention the scenery around here? Hit the tracks and roads and prepare for a treat. The views around Rawson, Walhalla and Mt Baw Baw are nothing short of spectacular.

Rolling hills, lush valleys and pristine rivers and well, there “ain’t no mountain high enough” … it’s enough to make a girl want to break out in song. 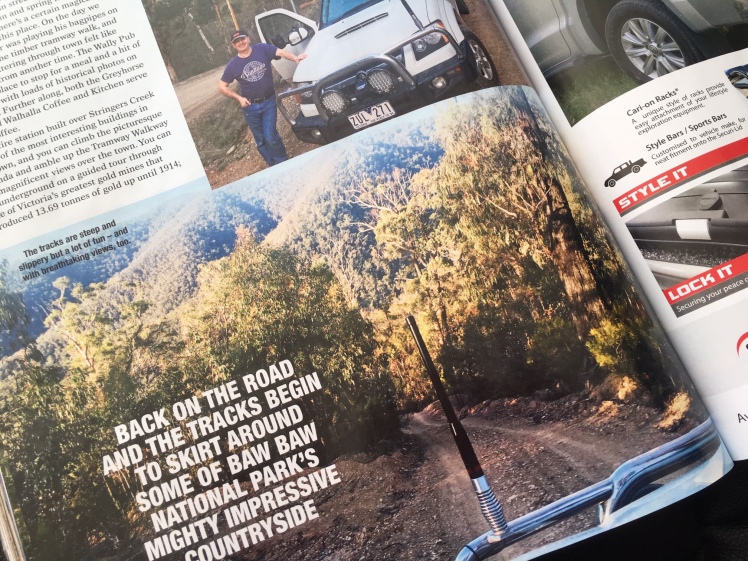 Rawson is an enticing part of Victoria, it’s just over two hours from Melbourne, taking the Moe turnoff and a perfect weekend destination. Another getaway = another story.

Enjoy your own journey, wherever you’re heading. Keep looking out for the magic and writing your own chapters, where you get to be the hero in your own life story. Where will it take you today?