There’s something about train travel that I’ve always found irresistibly romantic. Cocooned inside a warm carriage, rollicking along and watching the world go by, deep in thought.

That’s where I’ve been for the past week, every day, though it’s hardly been romantic. Destination: Austin Hospital in Heidelberg. Purpose: be with my other half. Mission: get him well and home again!

It’s been hypnotic, almost meditative, the clicking and the motion and the gentle sway as the train glides along the tracks. It’s also been easy.

On a train there’s no hassles with traffic or finding a park and there’s no battling the elements. It’s been arctic this past week but inside it’s dry and warm and I’m free to drift off and daydream. Big windows and expansive views that normally ignite my adventurous spirit allow me to ponder and focus on the positives in my life.

Whilst it’s hardly been an extended rail trip to a far flung destination it’s given me time and freedom to read, reflect and reminisce about a lot of things, including some of the train trips we’ve enjoyed in the past.

So, as I sit in this carriage and begin to type this on my phone, a distraction from other thoughts, I’m slipping back in time …

The sleepy township of Maldon, about two hours from Melbourne, has a great little rail trip on a steam train from Maldon to Castlemaine. I’ve written about this one before.

Travel in first class carriages through the central Victorian Goldfields, linking the historic towns of Maldon and Castlemaine. There are even Murder on the Orient Express themed trains, family excursions and romantic interludes. There’s something for everyone. You can even get up close and personal and ride with the driver. More info here on the Victorian Goldfields Railway.

I remember before our trip, standing on the platform, with steam swirling all around me, feeling like I was about to board the Hogwarts Express.

Now, if only I had that magic wand!

Nestled within the historic and picturesque township of Walhalla, about 2.5 hours from Melbourne, the restored Goldfields Railway is like a trip to a bygone era. We were there only a couple of months ago.

My next published article, soon to be out in 4×4 Australia Magazine, tells more of the story of this great little rail trip together with our four wheel drive adventure in Rawson.

As I wrote in my article:  “Although abandoned for many years, the rebuilt narrow-gauge railway between the Thomson Bridge and Walhalla is now one of the most spectacular rail journeys in Australia. It’s amazing to explore and ponder how, before 1910 when the railway was constructed, this isolated town was only accessible by coach or pack horse ..”

Arguably one of Australia’s most unique railways, the Kuranda Railway, in far north Queensland, is an amazing engineering feat.

Built in adverse conditions through treacherous terrain in the 1880s, by hand, this spectacular journey travels from Cairns and passes through breathtaking vistas, past waterfalls, into the awe inspiring Barron Gorge before arriving at Kuranda.

I loved our time in Far North Queensland. Though it was many years ago, I have awesome memories of the Kuranda train trip, white water rafting, flying over the reef in a small cessna plane and landing in the rainforest for Devonshire tea and snorkelling in the Great Barrier Reef.

Australia has some epic train trips, some small and others big, but they’re all memorable in their own way.

There’s the beautiful Puffing Billy in the Dandenong Ranges, the Ghan up north in our vast outback and the Indian Pacific which encompasses an unrivalled 4352kms. This includes the longest stretch of railway track in the world. From Sydney to Perth over the Nullarbor plain there’s no more epic train journey to be had in Australia.

Then, my memories took me back, a bit further still to our time in Italy:

European train travel can be spectacularly beautiful too.

Years ago, on our six week trip to Italy, one of the many travel highlights was our expedition to the northern alps. After catching a bullet train to Milan we switched gears to a country train to Aosta near the alps bordering France where we stayed with my Italian relatives.

Slow and steady. Sometimes that’s the best way to get to where we’re going. 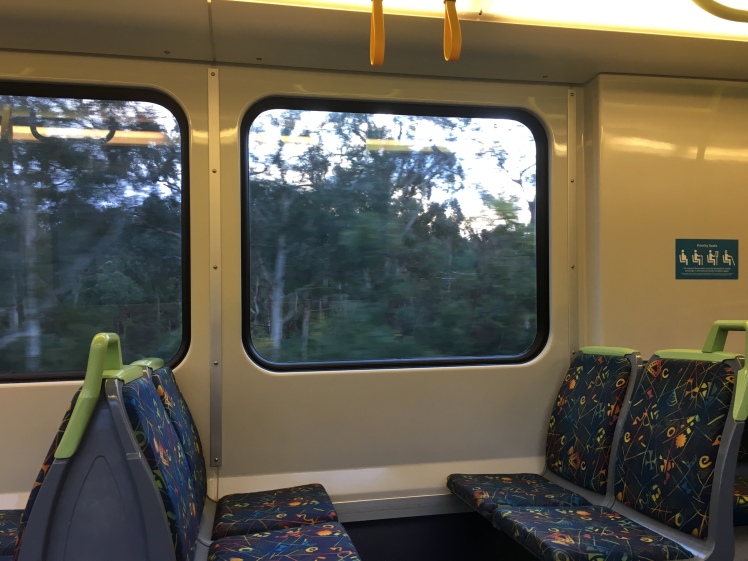 So, here I am again, heading back home on my local suburban train. There’s no alps in sight and it’s a far cry from the Orient Express or the Rocky Mountaineer. Though it’s no Bullet train it’s getting me to where I need to be.

As I read somewhere: “life is like a train ride. We get on. We ride. We get off. We get back on and ride some more. There are accidents and there are delays. At certain stops there are surprises. Some of these translate into great moments of joy, some won’t. “ But we ride on.

Thanks for travelling with me. Here’s to the making the most of the journey.

Happy travels, wherever you might be going in August.