I’d taken a couple of photos and a short five second video before deciding to put my phone away. Out on the still lake the morning reflections were picture perfect. The day was gently waking up.  If I’d kept my phone going I would have caught what happened next on film.

From nowhere, an almighty sound shattered the silence. It sounded like a gun firing, an explosion. I’d been looking down and hubby had lingered behind, reading a sign, but the sound woke us both up.

As we looked across the lake, trying to work out what had happened, we saw the debris. In the distance, not too far away, a huge circular ripple appeared in the water. The sound was still reverberating in my ears.

A dead tree trunk had shattered and smashed into the calm waters. How could a tree fall when the air was so still, with not a breath of wind. The force of it was eerie yet somehow magnificent too, an act of nature.

Then it was silent again, the trunk submerging and the only evidence ripples on the water. Ducks appeared as though they’d been woken up and were scanning the stark intrusion into their waters. We spoke about it as we began our circuit walk around the lake, how unpredictable nature can be.

Lake Elizabeth is a small mountain lake tucked away in the Otways, just out of Forrest, about 40 minutes from our campsite in Gellibrand.

In my last post I focused on the waterfalls of the Otways but this place deserves a special mention. Visiting is like descending into some forgotten prehistoric forest. The still glassy waters reflect giant tree ferns and the long dead trees poke up like drowned ghosts. Platypus are often spotted here, especially in the early mornings.

The lake was formed in 1952 after a massive landslide dammed the East Barwon River.  It’s not the first time we’ve been here but we’d never walked the circuit before. That was our plan. We were contemplating a quiet and tranquil loop walk and hoped to spot some platypus. How wrong we were!

Perhaps it was apt that the morning began with such a bang. It was almost like a starting gun because afterwards the runners came, in their droves. Yep, coming up behind us were loads of runners who’d converged on the area for the annual Forrest Run.  We knew it was on but had thought we’d timed it early to miss them. Timing schmiming!

Suddenly our walk was like Bourke Street. I’ll admit to feeling a bit cheated, as more and more runners converged on the narrow and normally peaceful track. What were the odds?

Still, we became accustomed to moving to one side as they continually ran by us.  “Passing right” and “good morning, passing” became familiar words. At one stage I told hub we should’ve just joined them and started running!

Oh the charcters you meet 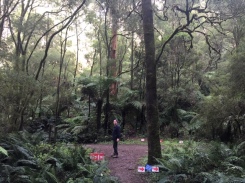 Doug joked that we should change the directional signs!

By the time we’d finished our 4km loop walk, our appetite had been fuelled (and we hadn’t even been running).  In town the fun run and another coinciding festival, the Soupfest, had brought the crowds out. Even the brewery was filled to capacity. However, at the far end of town we struck gold.

It was still quiet when we arrived at Platypi Chocolate cafe and we were able to grab a seat outside on the decking amongst the treetops. Our coffee and lunch was delicious in this cafe that’s only been open 18 months but is far from ordinary. As well as great lunch food, a wide range of delicious chocolates are made on the premises too. 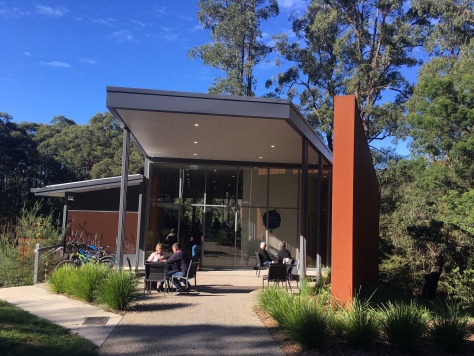 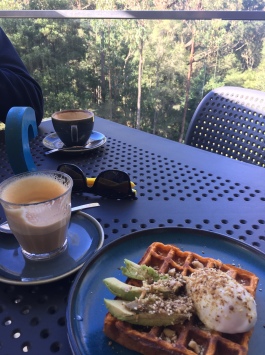 Lunch in the treetops

Later, driving out of town and our appetites appeased, the micro brewery was still buzzing.  It was once the town’s General store but now, all trendy and renovated, it’s been resurrected to become the hub of the town.  It’s “an equal parts micro-brewery, eating place and mountain biking hangout.” The last time we were here with friends, back in 2014, we enjoyed a beer tasting paddle and a great vibe.

Back in Gellibrand where we’re staying we toast to a great long weekend away. We’ve travelled from the heart of the Otways to more than five sides of the Great Ocean Road indulged in wonderful gourmet delights and topped it off with a beautiful lake walk.

Even amidst all the fun runners we could laugh at the wonder of our timing … the one day in the year we’re here and it coincides with the busiest weekend of the year in Forrest.

It gave new meaning to the movie expression “Run Forrest”. Well, that’s timing for you. Kinda like the timing of the tree that crashed spectacularly into the water, just as I looked away.

At least we weren’t on London Bridge when it collapsed. But that’s another story!

Happy travels everyone, wherever you are.

In love and light.

71 thoughts on “Forrest Runs and Falls”